I think one of the classes I most miss was Graph Theory, from Prof Estela Maris, at my undergrad level. It was extremely interesting and very theoretical, but quite useful in real life for some problems.
The proves of some properties of graphs were the part that demanded most of me, applying specific math knowledge for proving some properties of some graphs, i.e. trees, digraphs and so on.

I think most of the online courses I’ve seen so far they forget to tackle those kinds of data structure, and as another professor of mine used to say, if you forget the data structure you are halfway down the hill already.

So my recommendation is to study Graphs Theory and math proven, which certainly will be useful at some point.

My mother language is Portuguese-Br, also called Brazilian Portuguese, or Brazilian language, as the Portuguese people themselves call this way. It’s interesting that I started learning English in a formal when I was 9 or 10, but it is uncertainty the exact time I started to learn English, since many songs, sentences and jokes and movies (…) were in English.
Interestingly this happens with English, but some songs in French too, and other languages to some extent, like Russian and German. Much less though.

It is interesting that watching some movies with subtitles in different languages, English and French, or French and German. I understand much better than just watch in just one language.
Since the words are never the same, the adaptation is not 1 to 1. The translators usually read the plot, understand it and translate, especially for German.
So when watching a series in German with English subtitles we get different and complementary sentences that help understand the real meaning of the content.

Although I never did a post related to that topic, I’m very thankful for Canada for all the help I got here. I remember my first day in Canada, it if I compare with today, I can see the clear evolution, English skills, French, exchange, masters. Three provinces, 6 years.

Canada is really big and has many opportunities. Each province has its own characteristics and therefore are incomparable. I can’t compare also because of each province I had a different experience.

In Nova Scotia: I was a bachelor student living in the university’s residence

In Quebec: I was doing my masters near the university in a shared apartment. Just later on I got a job and an apartment.

In Ontario: I work mostly and live in a shared apartment.
I don’t know what it will happen in the future, but from the map below, someone could say I will move to Manitoba, then Alberta and retire myself in BC! haha! Since I’m moving always from East to West.

During my high school, back in 2015, Marcelo Moretti, who is a very close friend was immensely creative and taught me one very important lesson from Alb. Einstein actually from a book he recently had read that time:

“Imagination is more important than knowledge. For knowledge is limited, whereas imagination embraces the entire world, stimulating progress, giving birth to evolution.”
–Albert Einstein, What Life Means to Einstein (1929)

So on those daily exercises of creativity, he created several, at least a dozen futurist hands and call it, The Futuristic  Hands Project. Basically, the premise is that: based on several occupations, our hand would evaluate from that.

Recently I’ve seen some prototypes of robotic arms that somehow implement similar ideas and it’s interesting to see that sometimes, and android is very interesting on this part:

Some years ago, I started to follow Elon Musk on the news, basically, every day since Falcon 9 came back, that was memorable. I’m really glad I can live at the same time as this guy and see many space endeavours such as landings and going to Mars.

I keep looking for it every day before going to bed. It’s like a hobby. Unfortunately, the current algorithm for google news classification only takes into consideration the time a news was generated, instead of bringing me something new, it brings several times the same news from different sources.

1. Open all the news without classification

3. This news is registered and it’s main content marked

4. The news line comes again without the news I already read.

I think Falcon 9 made an extremely interesting evolution, especially now with Block 5 series, in terms of reducing the cost.  However, the FH and the Big Falcon Rocket will certainly be fantastic machines.

I remember the day we saw FH launching and coming back, the two boosters at the same time, this was at Maya. It was really something cool.
The BRF is always changing and this makes it difficult to follow, but there are some sources as Teslarati.com and YouTubers specialized on space content that makes it easier to gather all this information. Not just the names changes, but the specifications too.
I would like to understand actually is why they just release another Falcon 9 with the new Raptors engines, a Block 6 for example, just a test for Raptors engines first, instead of developing it straight to BRF.

Although not on my CV, or Linkedin Profile, when I move to a new place and before getting a job in my field I usually start working in a not IT related job. It was like this in Sao Paulo, then Montreal and then Toronto.

In Sao Paulo, I delivered food, cooked pizzas and even worked in a factory. All valid experiences and I carry all the people I met in the same place. Diskcook, Dominos Pizza, being an office-boy delivering documents.

In Montreal I started with restaurants and it was a very interesting opportunity to work – stand up – meet people and go beyond my bubble of computer related stuff. The nights at Le Poke Bar and La Banquise were awesome, lots of work and lots of fun with the team.

In Toronto, I started working at Batch Restaurant and Bar, amazing place, amazing people. We had more fun there working than when I was at my home or hanging out sometimes haha!

I think this makes me see the things a bit differently than just if I had IT jobs or as they say in Brazil, “working in the office”.

My conclusion is that I learned and improved humility by working on all those jobs and learn many lessons that I wouldn’t learn that fast in my own field.

Although I try to keep this blog a formal and for programming stuff, sometimes I talk about more stuff. Today I want to talk about the movie/book, which I saw yesterday. Every time I see it, I understand it differently. The first time was that Hanna was very proud and stubborn, later on, the second time I saw it, I was sure she was innocent and that HE was wrong by not helping her. The third time, yesterday, I think she was partially guilt but might be not pursued as of common criminal (fr: Imputabilite – pt-br: inimputavel).

The book vs The movie

There are some interesting changes in the book and in the movie – spoiler – in the book Hanna tried to contact him before killing herself. But anyways.

i) Hanna, although an adult, is still a child in terms of emotional intelligence and naive – and therefore does not understand and express really well love. She does all she was taught, like work and self-organization. However, she does not knows how to READ AND TO LOVE, since she was never taught. Basically, this hypothesis deals with her background – no family and no friends – and that love is an ability that can be learnt.

ii) Hanna, although very well organized and adult, is basically not able to love, either because she has a sociopath condition or for some other reason, like she is in the ASD – autism spectrum. In fact, this would explain many of her intriguing behaviours, such as the fact that she can’t put herself on other person’s mind when the church is on fire.

Question: Does she really had the intention to kill the kids on the church, aka Mens rea[1] of the crime?

Today 12/10 I have an impression that they changed the spam verification algorithm on FB to verify backwards posts. A friend of mine came to me saying that her post was deleted without noticing, while I receive a message from FB asking if one of my posts was Spam.

Mine image was just a meme of a guy with a big hammer. No doubt they ask right, hammers nowadays = communism, JK.

The changes evidently show that the algorithm is also verifying the image, i.e. the recognition pattern, and I’m sure they are using some historical, distortion pattern verification or even mood comparison. The image is below and we can see that it would fail in one of those three hypotheses. 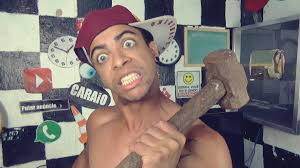 Everton Zoi has his youtube channel where I extracted the image above [1], this video he used a hammer to complain about some racist comments on the internet.

I remember when I first started to play the bass guitar, back in 2012. The school was near the university, like very near, about 15 minutes and I could stay a bit later on Wednesdays, which was a day the courses would start at 19h or later.

The bass is a very important instrument for music composition and percussion too. It marks the flow of the music and its body. Later on, I had contact with the drums and it was really cool for me. But also important for the learning process at the university.

I think music combines two important things: total attention and free-time activity. That is, your brain is totally on that moment since it must pay attention to the lyrics and movements AND it is relaxed on the other problems of life or work.

Playing a musical instrument actually makes you happier [0]. Besides, there is some relation between music, dance actually, and wellbeing – a way to say happines[1]. But I will talk about dance on another day.
There is some relation of coding and playing a musical instrument too, I can record how many times I had mini-EUREKA after dancing or playing the Cajon. But this I will talk another day too.

Reading about the news and the elections back in Brazil, I recently found out that 100 sites/pages make the force for one candidate on the elections, Bolsonaro (far right-wing) with over 12.3 million interactions on Facebook alone. His main page has 7million subscribers. All that interactions, according to Estadao analysis[1], are from only one group RFA, which controls more than one hundred pages under this umbrella.

However, interestingly I wonder how one group of media is responsive for 12.3milions of interactions, which is the highest on Brazil among all the pages, including Neymar pages.
I can see that the opposition (i.e. Haddad campaign) might have more money! So how come they have more interactions?

Well, doing some analysis here, the hypothesis that I currently have is: Although the left has more pages, they have style. The right-wing pages have different nuances, sometimes completely different ones.  That’s very well thought actually.   I remember when learning game programming for AI there were adaptative algorithms, and I think that’s the answer. It’s an adaptative algorithm [2] to release several pages, see how they generate interactions and keep improving from that. Actually, the book helped us to create adaptative characters, which have different skills sets, randomly created and therefore can find the weak spots of the player, they can be also self-adaptives too.
The pages are totally unrelated and for a common/fast reader it’s not explicitly saying they have something related actually. Each page has its own characteristics, e.g. person that talks, name, figures, post dates and style.

So although they content is right-wing, it has more impact on the common population, the pages that don’t generate sharing are basically excluded or changed.